After The Battle : Americans Across The Moselle (Issue N0. 171) 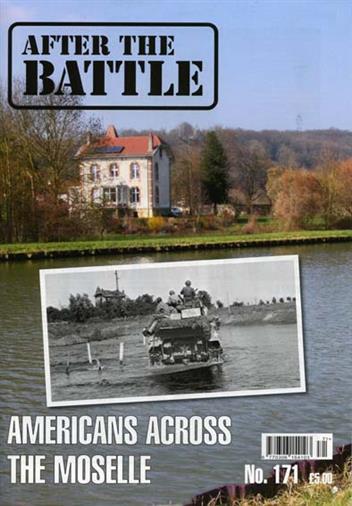 Stock image only. Actual cover art may differ.
Americans Across the Moselle — In early September 1944, troops of the Third Army reached the Moselle river in north-eastern France along a 120-kilometre-wide front. Their objective was to cross and capture the town of Nancy, the river crossing and battle being described and illustrated with comparison photos by Jean Paul Pallud. The US Pacific Dishonoured Plot — Colonel Charles A. Jones explains how US servicemen executed in the Pacific Theater for capital crimes (including Edward Leonski, the ‘Brown-Out Strangler’ in Melbourne, Australia) are buried in named graves -- some on the island of Oahu at Schofield Barracks and elsewhere in the Philippines -- whereas the American European dishonoured plot with its unidentified numbered graves is closed to the public. The Catterick Bridge Explosion — Barrie Morris describes the day when an ammunition train exploded in the north of England, leaving many dead and injured. Führerhauptquartier ‘Wehrwolf’ — Located just north of the town of Vinnitsa in the Ukraine, this was the easternmost of all Hitler’s headquarters. Martin Bogaert and Andrew Shvachko tell the story of its construction and explore the site to show us what remains today.
Publisher
After The Battle
Format
Softcover
Categories
History & Military

Ruckmarsch : The German Retreat From Normandy : Then And Now
A$109.94
FREE SHIPPING