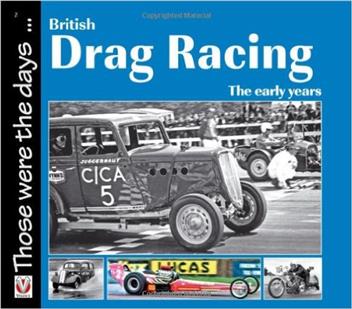 Stock image only. Actual cover art may differ.
Born in America in the late 1940s, drag racing soon spread across the world, reaching Britain in 1960 when some local hot rod clubs joined forces to form the British Hot Rod Association.

At the same time, Sydney Allard saw drag racing as a new challenge, and began building an American style-dragster in the Allard workshops. Sydney also brought over teams of American dragsters to show the British what drag racing was all about, while the British Hot Rod Association was holding meetings on RAF runways with a growing number of enthusiasts who were building their own dragsters based on the American machine designs. John Bennett realised that for drag racing to grow in Britain a permanent facility needed to be found, and at the end of 1965, he announced that Podington airfield was to become Santa Pod Raceway, opening for business in 1966. This book takes a detailed look at the burgeoning British drag racing of the 1960s, complemented by rare colour photos. It follows the development of Santa Pod Raceway, and the ever increasing fields of competitors that ran there up to 1969. A fascinating, nostalgic study of one of the fastest, loudest, most powerful motor sports in the world.

● Fully researched history of British drag racing in the 1960s
● 100 previously unpublished dramatic colour pictures
● A pictorial history of British drag racing from 1960-1969
● How the sport of drag racing began in the UK
● A perfect complement to the growing nostalgia drag racing scene
● Ingenuity in action as racers develop their own speed equipment
● Pictures include action shots and scenes from the pits
● Period support vehicles feature in the pictures
● Check out the period dress code of the fans and racers
● All researched from primary sources
Publisher
Veloce Publishing
ISBN
1845843371
ISBN-13
9781845843373
Format
Paperback, 96 pages
Published
2011
Categories
Transportation > Motorcycles, Scooters & ATVs > Racing > Drag Racing
*FREE SHIPPING is available within Australia only
back to top