After The Battle : Eisenhower Visits The Falaise (Issue N0. 178) 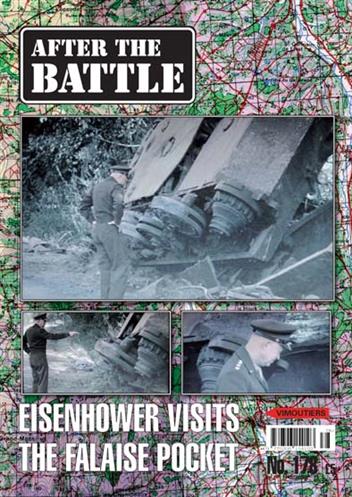 Stock image only. Actual cover art may differ.
EISENHOWER VISITS THE FALAISE POCKET — In August 1944, Eisenhower visited the Falaise battleground but the exact route and places he visited have never been identified before. Our author, Jacques van Dijke, is the fist to accurately reconstruct the itinerary. Hitler’s Diplomatic Tour in the West — Jean-Paul Pallud tells how in late October 1940, Hitler went on an eight-day diplomatic tour in the West, where he met with the leader of Spain, Generalissimo Francisco Franco and then Maréchal Philippe Pétain, the Head of State of defeated France. The Rehabilitation of the Channel Ports — The rapid advance of the Allied armies across France and into Belgium in August-September 1944 made it imperative to employ every possible means of shortening supply routes: hence the rehabilitation of the Channel ports was a priority which included the urgency of bring the major deep-water port of Cherbourg into use. All the harbours had suffered severely from demolition work carried out before their capture and repairs to Dieppe, Boulogne and Calais fell within the responsibility of the Transportation Directorate of the British 21st Army Group. Jean-Paul Pallud tells this remarkable story. The Isle of Man Internment Camps — Connery Chappell tells us how the Isle of Man in the Irish Sea became an ideal location for the internment of German and Italian-born residents in the United Kingdom whose loyalty was deemed questionable. Now Britain was at war, the empty hotels and boarding houses provided ready-made accommodation.
Publisher
After The Battle
Format
Softcover
Categories
History & Military