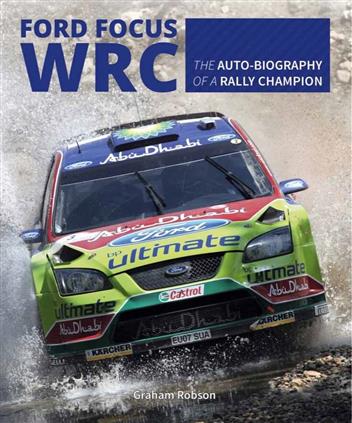 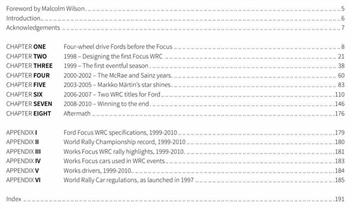 Stock image only. Actual cover art may differ.
The story of the 97 Ford Focus WRC cars during their 12-year rallying career; there were 44 World Championship victories, and the team won the World Rally Manufacturers’ Championship. Drivers included Colin McRae, Carlos Sainz, Marcus Grönholm and Mikko Hirvonen, with sponsors including Martini, BP (and Castrol), and the state of Abu Dhabi.

When world rallying introduced a new formula for ‘World Rally Cars,’ Ford needed a completely new car to meet the new rules. Malcolm Wilson’s M-Sport organisation, then small but soon to expand considerably, was contracted to do the job, completed the design in less than a year, and spent the next 12 years campaigning this turbocharged four-wheel-drive car all round the world.

Working from state-of-the-art premises at Dovenby Hall, near Cockermouth, in Cumbria, M-Sport built a total of no fewer than 97 Focus WRCs, which were always competitive at World level, this being proved by the fact that they won 44 World Championship events. In that time, stellar drivers such as Colin McRae, Carlos Sainz, Markko Märtin, Marcus Grönholm and Mikko Hirvonen all added to the mystique of an ultra-professional organisation, along with substantial support, and sponsorship, from the drinks giant Martini, the oil company BP (and its major subsidiary Castrol), and the state of Abu Dhabi.

In building up its own in-house technical expertise, M-Sport not only engineered and developed the entire car on behalf of Ford, but gradually took over development (and eventually manufacture) of the 300bhp 2.0-litre turbocharged engine, and led the design of the complex four-wheel-drive transmissions provided, at first, by Xtrac, and later by Ricardo.

M-Sport’s reputation within the sport of rallying was such that, when the regulations once again changed, the company was immediately able to produce a new-generation Fiesta WRC, and continue with its winning ways.

● The complete 12-year story of the Ford Focus WRC’s career in World Championship rallying
● In 12 years, the Focus WRC won 44 World Championship events, and the annual Manufacturers’ Championship on two occasions.
● No other Ford car has ever achieved so much in motorsport as the Focus WRC
● An unrivalled analysis of the birth, design, and evolution of Ford’s Focus WRC project
● Detailed coverage of events, victories, and Championships in the 1999-2010 period
● M-Sport, Dovenby Hall, and the growth of a famous motorsport team
● Interviews and viewpoints of all the major characters – team owner, sponsors and drivers.
● For the first time, cars, drivers and engineers all profiled in great detail
● Listing and competition history of all 97 WRC cars built
Publisher
Veloce Publishing
ISBN
1787110206
ISBN-13
9781787110205
Format
Hardbound: 208 pages
Published
2017
Categories
Transportation > Cars & Trucks > Makes and Models > Ford > Focus
Transportation > Cars & Trucks > Racing > Rally
*FREE SHIPPING is available within Australia only
back to top